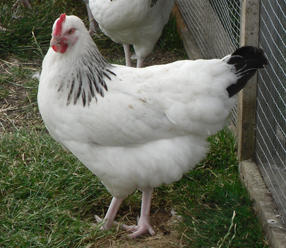 The Sussex chicken is a dual purpose utility breed that is also popular on the show scene and relatively easy to keep.

Sussex chickens are upright, alert, and usually docile. The Sussex Chicken has a wide, flat back, a deep breast and broad shoulders. Their tail is held at 45 degrees. They have a single comb and red ear lobes and comb. They are good foragers and the Light Sussex is often used to create hybrids. When crossed with a ‘gold’ cockerel, they will produce sex-linked chicks. They rarely go broody.

The Speckled Sussex was created in Britain in the 18th Century, first appearing at a poultry show in 1845. Other colours were soon created with different crosses but the Buff Sussex didn’t appear until 1920. The Coronation Sussex was created for the coronation of King Edward VIII in 1936 (this didn’t actually happen because he abdicated and his younger brother became King George VI) but there were very few birds by the beginning of World War 2. We have found one strain of the original Large Fowl remaining but Coronation Sussex were re-created and re-introduced by Rob Whittington. Large Fowl are very rare but slowly making a comeback.

The original Speckled Sussex chickens are thought to be a cross between white fleshed table birds and an imported Asiatic bird like the Brahma. The modern strains of Sussex will lay around 180 to 200 medium-sized eggs in their first year for you without artificial lighting.

They are a popular white fleshed chicken used for producing meat. The chicks of all of the varieties are fast to mature, with the exception of the speckled that takes a little longer.